Benchmarking a CLIJ workflow versus ImageJ/Fiji

In order to measure performance differences between ImageJ and CLIJ based workflows, we conducted benchmarking experiments.

The workflows were benchmard using image stacks acquired on a custom multi-view light-sheet microscope with two detection arms giving opposing views on the sample. The imaged Drosophila line (flybase 23651 shows histone-RFP marked nuclei when being imaged using a 594 nm laser. The used image data is available online. The image stacks stored with 16 bits per voxel are 121 MB large on disc, with 512x1024x121 voxels and a voxel size of 0.52 x 0.52 x 2.0 cubic micrometer.
For the benchmarking, 300 image stacks acquired while the embryo develops from stage 4 to stage 8 were analysed.

Benchmarking was executed on

The presented workflow consists of these major steps: 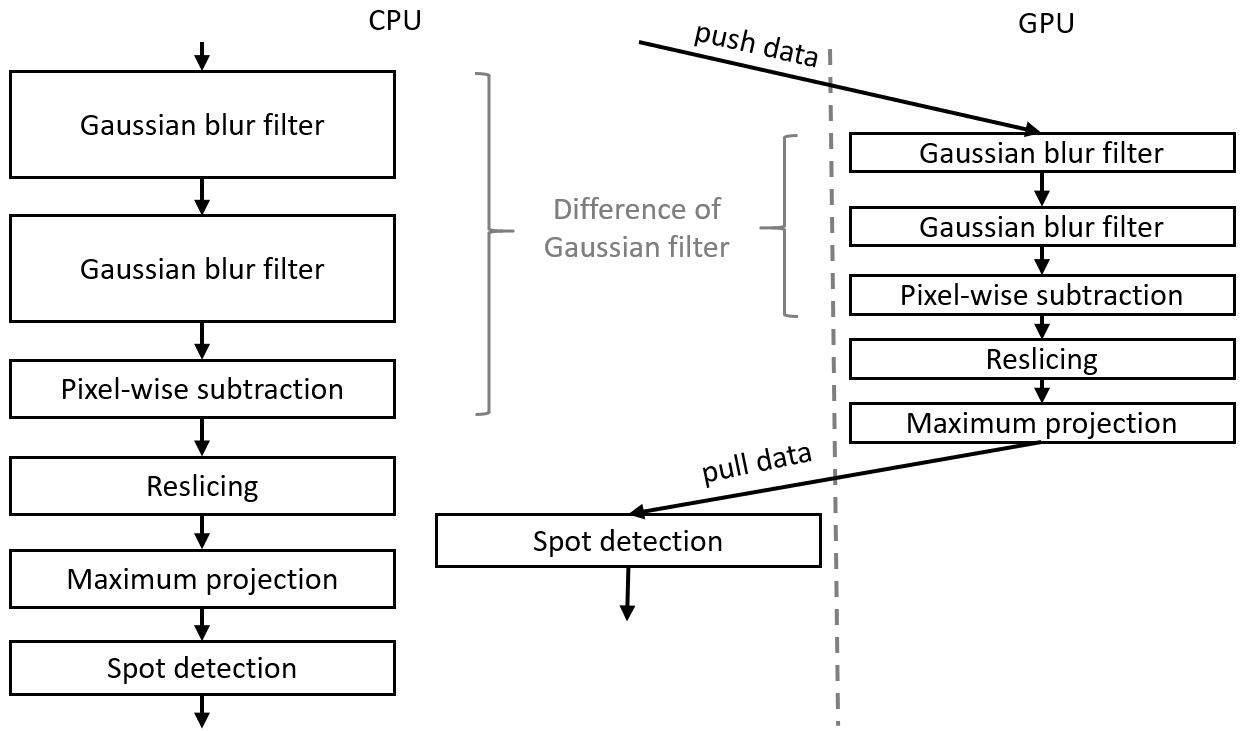 The source code of both workflows is available online.

When benchmarking the two workflows, we also included data transfer time, file read/write times and compilation time to give a realistic impression of how much workflows can be sped up by GPU-acceleration. Furthermore, to minimize harddrive I/O speed influencing the benchmark, both workflows loaded the image data from a USB 3.1 flash disc and also saved the resulting image data on it.

The measurements in this section can be reproduced using the AnalyseWorkflowBTimes.ipynb Jupyter notebook.

Visual comparison of the results of the workflows reveals no obvious differences between the surface projection images. However, the spot detection show differences in regions of the 2D projection where nuclei are hard to differentiate also for the human observer. These regions, below marked with white triangles are located in center of the embro. Center in this context means in the middle between the two detection objectives utilized in the multi-view light sheet microscope which acquired the image data.

LINK TO VIDEO COMING SOON The macros generating the video are available online.

By plotting the spot count of the two workflows executed on the two test systems over time we get a first impression on the estimation of the cell count:

During the first time points, the time lapse shows a mitotic wave which explains the peak in spot count. Afterwards, when nuclei increase visually in size, the spot count goes down until appoximately time point 80. Then, between time point 80 and 180, spot count stays mostly constant. This is stage 5 of Drosophila embryo development. Afterwards, as soon as gastrulation starts, the spot count decreases again which is related to the invagination of cells. As the workflow count spots on a surface projection, it cannot detect nuclei in multiple layers.

Quantifying the overall measurements revealed that mean relative differences of 0.9 +- 0.6% when comparing the workflows based on ImageJ and CLIJ.

As results on Workstation and Laptop were not identical when using CLIJ, we also compared the results in more detail: We observed a mean relative difference 0.05 +- 0.04 % between the identical code being run on an Intel HD versus Nvidia card.

Comparison of spot count results reveals that there were no differences between ImageJ on Workstation and Laptop detected.

Numbers and plots listed in this section can be reproduced using the Analyse_differences Jupyter notebook.

Contributing to this project

If you want to contribute to this project, feel free to clone the repository, execute the benchmarks and file a pull request with your measurements! Also, please specify your CPU and GPU hardware when filing the PR.