CLIJ was successfully tested on Windows 10, MacOS, Fedora linux and Ubuntu linux. Current GPU and OpenCL drivers must be installed.

Are Windows 7 and 8 supported?

Maybe. As Windows 7 and 8 were discontinued before the first CLIJ release, we didn’t test it. Theoretically, both systems support OpenCL and GPU vendors provide drivers for it. Thus, depending on the vendor, it mike work without issues. However, we had reports that serious crashes happened on Windows 7 systems with several different GPUs.

Yes, if the GPU-configuration allows shared usage. There have been reports of failing CLIJ initialization on Windows Server 2019 when multiple people can access it remotely via the “Remote Desktop Session Host”. A potential solution is to replace the Java Runtime Environment that is delivered with Fiji.

Thanks to Thomas Zobel for finding this out!

This second option is similar but use a combination of 2 Java JDK from AdoptOpenJDK.
See the original solution on the forum. 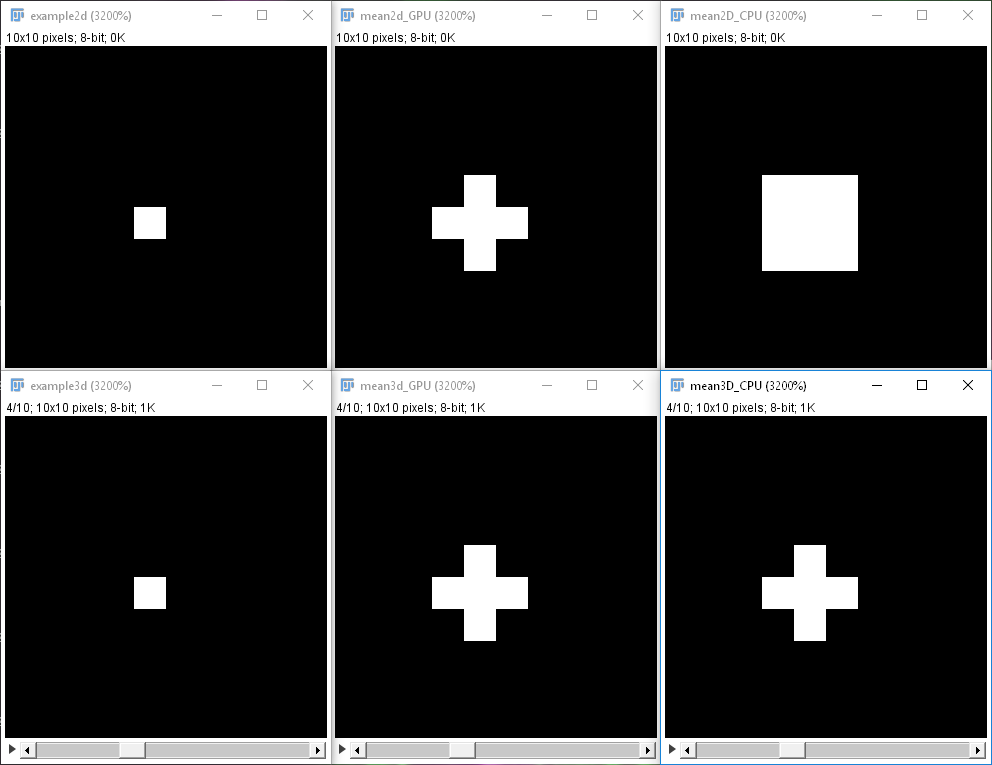 Not directly. CLIJ supports two and three dimensional images. If the third dimension represents channels or frames, these images can be processed using CLIJs 3D filters. In order to process 4D or 5D images, it is recommended to split them into 3D blocks. There are functions like pushCurrentZStack and pushCurrentSlice to simplify this.

CLIJ was the first official release of the project in 2019. In 2020 CLIJ2 released and in 2021 CLIJ2.5. With the 2021 release, CLIJ became obsolete. If your project still uses CLIJ commands, you should upgrad to CLIJ2. CLIJ2 and CLIJ2.5 are backwards-compatible. Read more about the release cycle. CLIJx is the experimental sibling to CLIJ2 with functions that are yet under development. It is in general recommended to avoid using these experimental methods. However, we’re developing it in public and thus, you’re welcome to try and feedback is very welcome.

The CLIJ2-assistant (a) is an officially supported user interface in Fiji, that is installed when activating the clij and clij2 update sites. The CLIJx-assistant (b) is its experimental sibling with additional functionality that is under development. It can be installed with the clijx-assistant update site in Fiji. Visually, both can be differentiated by the headline in the right-click menu and through the additional menu entries (arrows):

Is it possible to compile a CLIJ dependent project with all dependencies in a single JAR file?

You can pack your clij dependent project together with clij and all its dependencies in an uber-jar. This is also how clicy and clatlab projects work. It’s basically just an entry in their pom.xml files.

Can I develop my own OpenCL code and compile it as plugin for CLIJ?

Yes, there is a template-plugin available for clij2, where you can input your code. Reminder: It’s OpenCL, not C ;-) Furthermore, CLIJ brings some convenience functions (actually defines) to make OpenCL easier to use. You find a full list online.

How does CLIJ development work in Eclipse and IntelliJ

CLIJ projects are best managed, compiled and deployed with maven. Just import the pom.xml in your Eclipse, IntelliJ or other IDE as project.

Can CLIJ also be executed on CPUs instead of GPUs?

Yes, as CLIJ is build on OpenCL and OpenCL also runs on CPUs. One may have to install special drivers to make it work.

Can one execute CLIJ commands conditionally in ImageJ macro?

Yes, as images are basically managed in variables:

Errors may pop up when processing big images on NVidia cards on Windows (CL_INVALID_COMMAND_QUEUE, CL_INVALID_PROGRAM_EXECUTABLE, CL_MEM_OBJECT_ALLOCATION_FAILURE): The issue is related to a timeout of the operating system interrupting processing on the GPU. Add these keys to the windows registry and restart the machine (warning, don’t do this if you’re not sure. Ask you IT department for support. Read the BSD3 license file for details on what why we’re not responsible for your actions on your computer ):

Here is more information about what TDR is: https://docs.microsoft.com/en-us/windows-hardware/drivers/display/tdr-registry-keys

Similar to NVidia drives (see above), issues may appear due to a timeout when processing large images. The issue is related to a timeout of the operating system interrupting processing on the GPU. Add these keys to the windows registry and restart the machine (warning, don’t do this if you’re not sure. Ask you IT department for support. Read the BSD3 license file for details on what why we’re not responsible for your actions on your computer ). Similar to the solution above, enter a new key in the registry of Windows in this path

The key should be called TdrDelay and have a value of 8.

On an “Intel(R) HD Graphics Kabylake Desktop GT1.5” used from Ubuntu Linux 20.04 it was observed that some operations lead to empty images. Furthermore, a warning is shown on std err Beignet: "unable to find good values for local_work_size[i], please provide\n" " local_work_size[] explicitly, you can find good values with\n" " trial-and-error method.".

This issue can be solved using the device “Intel HD Graphics Gen 9 NEO”. Also, please refer to the installation instructions for linux.

When creating CLIJ instances and closing them repeatedly, it crashes after about 40 attempts. This test allows reproducing the issue on specified hardward. Workaround: Don’t close the CLIJ instance and keep working with the singleton instance.

MacOS shows login screen after running CLIJ for a while

On some MacOS systems with modern AMD Graphics Cards, CLIJ causes a crash which leads to the operating system restarting the session and logging out the user. Reason is an energy saving mode. To solve this problem, turn off “Automatic graphics switching” under “System Preference” > “Energy Saver”. Thanks to Tanner Fadero for reporting this bug and its solution.

If CLIJx_deconvolveRichardsonLucyFFT outputs a java.lang.UnsatisfiedLinkError as shown here, installation of the Visual Studio Redist package might help.

Class not found on Linux

CLIJ doesn’t start on Ubuntu linux with an error message that a class called ClearCLBackendJOCL cannot be initialized. This may be cause by a missing GPU driver. Please refer to the installation instructions for linux.

CLIJ throws various exceptions, like CL_OUT_OF_HOST_MEMORY on Linux. Please refer to the installation instructions for linux. Furthermore, when exploring such issues in 2019, on Fedora 27 Linux, this command list helped:

More info can be found on the website of the beignet project.

In case you are trying to create a conda environment and you receive this Warning message: WARNING: No ICDs were found. or you wish to have several ICDs detected, you can also install via conda the ocl-icd-system. It will make sure your system-wide ICDs are also visible in your conda environment (tested on Linux-Mint 20.1). See here for more informations

Can I remove the CLIJ buttons from the Fiji toolbar?

Yes, just delete the file clij2_assistant_autostart.ijm from the folder Fiji.app/plugins/Scripts/Plugins/AutoRun/.

What is the difference between the CLIJ2 and the CLIJx assistants?

The CLIJ2 assistant exposes CLIJ2 functions only and allows code-export to scripting languages supported by CLIJ2 (Macro, Javascript, Groovy, Jython, Matlab). The CLIJx assistant additionally offers experimental CLIJx functions and export to scripting languages such as QuPath-Groovy for cluPath and clesperanto-Python. While the CLIJ2-assistant gets delivered via the clij and clij2 update sites in Fiji, the installation of the CLIJx-assistant needs multiple update sites installed.

If you experience an error like the following on, you may be using the 32-bit version of ImageJ/Fiji. Only the 64-bit version is supported.